Summary: A patient was sent by her doctor for two "procedures" (for lack of better word) that turned out to be completely unnecessary. The reason the patient was sent was due to a lack of research or a simple verification of information on the part of the doctor (a.k.a. failing to ask the patient one question or to give the patient a thorough explanation of the procedures). In the end, there was no physical damage because of these two mistakes (as far as modern medical science is able to prove at this point), but financially it cost the patient about $500 from her own pocket. Naturally, the patient is frustrated with the incompetence of the doctor (and for other reasons as well), and wonders if there is any type of compensation available. Is there anything at all that can be done other than give poor recommendations for this doctor and never return?

Specifics:
Procedure 1 was a total of $1,129 with the Insurance Contract Adjustment leaving the charges at $790.30. Insurance paid $715.42 while the patient paid $74.88. One of the charges on this bill was for a consultation that consisted of the doctor asking why the patient was there because it was totally unnecessary. Apparently that's worth $345. Thank goodness the Insurance decided to cover most of that one!

Procedure 2 was a total of $1,161.85 with the Insurance Adjustment leaving the charges at $606.47. Insurance paid $139.84 leaving the patient with $415.54. Why wasn't more covered? The patient intends to look more into the Insurance side of this bill. The patient has called the number on the bill to understand the charges. The associate had no idea why one was listed as a delivery room charge (almost $200) and the other pharmacy ($960), but both charges on the bill were apparently for the shot (which, may the reader be reminded, was completely unnecessary in the first place).

The Doctor has already been confronted, but mostly as a verification that the two procedures were unnecessary (which was confirmed without an apology) and following only the $75 bill (the other had not been received at the time). "We usually don't even ask because most people don't know" was the Doctor's response. In other words, "What do I care if someone actually does know the answer? No skin off my back, I don't lose out on $400."

Plea:
If there is anyone reading this who is or knows someone with knowledge of these matters, please comment with advice for this poor patient. Five hundred dollars is not pocket change.
Posted by sherrie bebe at 1:46 PM 3 comments: 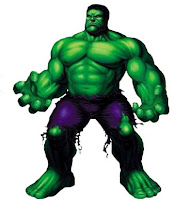 I'd heard that pregnancy can conjure up bizarre dreams, but I never experienced it much with with Annalee. Currently, though, I have had some pretty interesting night-time drama. Mostly it's just incredibly strong, negative emotion. Things will happen in the dream and I lose all control in fits of anger, hatred, and frustration. Yelling and throwing things are not uncommon in my uncharacteristic night-self. Last night was no exception. I was playing soccer for my dad's team, apparently as a guest. He put me in for my sister as the last defender. The other team got a few goals and I was put in a different position, replaced by my sister again. We must have ended up losing and at first everything was fine. I guess my dad or somebody said something and it occurred to me that I was being blamed for the loss since they had scored when I was on defense. My nighttime Incredible Hulk personality exploded and for the rest of the dream I was in a rampage blowing up at people, yelling, arguing, running, throwing things, etc. Can we say ultrasensitive?? Needless to say, such strong emotion often wakes up with me. Sometimes I can carry on with the morning and my inner Hulk goes back into the shadows. Other times it is not so easy.

This morning Lee came to give me a kiss goodbye and told me I could keep sleeping because Annalee was still asleep. Unfortunately, even in my grogginess, my appointment alarm buzzed in my brain reminding me of Annie's early doctor visit. Since I had to get up anyway, I called Lee back in so we could say our morning prayers together. So far so good. My emotions from the night's dream seemed buried with the moon. Too bad it didn't last.

I won't go into detail of the exact situation, but let it suffice to say that I made a stupid mistake that I was consciously trying to avoid (something with the computer) and all the sudden, the Incredible Hulk from my dream burst out into the light. When it happens in real life, it's just the strong emotion of frustration. I don't actually start screaming and yelling and hitting things...for the most part. In tears, I got Annalee out of bed and we got ready for the appointment. Surprisingly, Annie ate all her breakfast and fairly quickly so we were actually almost on time. From then on, things got even better.

As I look back, everything was amazing. The radio played good uplifting songs that lifted a bit of my load. Annalee was the best she's ever been with the doctor, actually letting him do a complete examination. She continued to be fabulous on our little shopping spree, which is unusual since we made lots of quick stops. Even though I was still unsuccessful at finding a swimming suit for my pregnant self, it was actually enjoyable somehow, probably thanks to Annalee being a doll. Then as I was just finishing up, I got a phone call from my wonderful husband to see if I was out and wanted to meet him for lunch. Not only did I get to spend time with him, but I didn't have to go home and try to figure out what to make for lunch.

On my drive home, I almost teared up as I realized the turn of events in my day. It started off with remnants of negative emotion from my dream and turned into a magically good morning. The Lord blessed me in so many small ways and I had to wonder why. That's when it occurred to me that we had said our morning prayers. Funny how doing such a small and simple thing can bring such small and simple blessings that make a big difference.
Posted by sherrie bebe at 11:03 AM 2 comments: