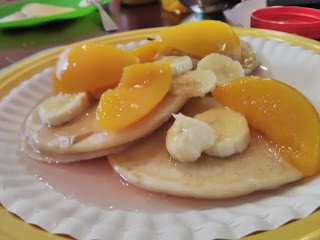 Extremely long preface:
Nobody told me that being a mom would mean I'd spend most of my time in the kitchen.  I think I would enjoy cooking if I understood the process better and didn't have to rely on recipes all the time.  I often experiment, but only in tweaking recipes simply because I don't have all of the actual ingredients.  It's fun to invent my own substitutions.  Sometimes they work, sometimes they don't.  I have learned not to tell my husband that I experimented with his meal until after he has tried it...I guess it hasn't worked more than it has.

The other day I had a vision.  I was laying in bed trying desperately to catch a quick nap while my 4 kids were locked in their rooms supposedly taking naps as well.  My head was slightly aching, perhaps due to tiredness and perhaps due to hunger, but I couldn't risk taking time to eat or I might lose my chance at a little rest.  So I was just laying there, possibly thinking about what the heck I was going to cook for dinner yet again, when all of the sudden, breaded shrimp danced through my thoughts.  Yum.  Yes, that would make a great meal.  I knew I had a little bit of shrimp in my freezer and it's something even my kids love.  Why has it never occurred to me to bread it?  I bread chicken all the time, why not the shrimp?  But it wouldn't be enough.  It would need noodles.  My kids love noodles.  But what in the world can I put on the noodles??  I can't have dairy currently (seriously upsets my newborn), and I have a mouth full of canker sores so a marinara sauce won't due.  What about a garlic lemon butter sauce?  And then it came to me how I might go about creating my own garlic lemon butter sauce.  Veggies?  Why a green salad with bright red tomatoes would be the perfect touch!  I was in love and knew that I just had to try it!  If it failed, there's always take-out.

I found myself almost giddy with excitement to cook dinner (that never happens!).  My 6 year old daughter was my little chef helper and proved herself most worthy.  In case you would like to replicate my meal, below are step-by-step instructions exactly as they occurred (or as I remember them occurring anyway).

1. Put water in pot and turned up heat for it to boil.

2. Meanwhile, I defrosted the shrimp under cool running water.

3. I threw together some flour and lemon-pepper seasoning in a bag and cracked an egg in a small bowl.

4. I tossed some butter (margarine, actually...less dairy) in a frying pan and began de-tailing the shrimp while the butter began melting (it's the already-cooked kind of shrimp).

5. My little chef helper proved most helpful as the melting butter began sizzling and I was still pulling tails off the shrimp!  She pulled off the tails, patted them dry, and plopped them in the egg bowl while I took them from the egg, shook them up in the flour bag, and placed them in the sizzling butter.

6. At some point the water boiled and I threw in about half a package of Angel Hair pasta with some oil and turned down the heat, admittedly proud of myself for remembering to turn down the heat and avoiding another boil-over.

7. I had to add more butter to the pan because the shrimp was sucking it all up too fast! After flipping the shrimp so both sides were browned, I removed them to a plate and stuck it in the microwave on the setting "hold warm."

8. I threw in more butter to the pan to start the sauce, but it began browning too quickly and was sizzling like crazy and I was afraid it was going to burn and ruin everything!  I panicked and threw in some water.  The plan was to mix in the flour from the bag first...oops.

9. I decided I would just mix the flour in with the lemon juice....until I realized we were out of lemon juice.  Luckily we had some limes.  Lemon...lime...both sour.  I squeezed a single lime in a cup and poured in all the flour from the breading bag.  Way too much flour.  Squeezed another lime.  Still too much flour.  So I added more water and poured it into the butter/water mixture in the pan while stirring not-so-gently with a whisk.

11. I threw in some seasonings: Basil and meant to do Oregano, but couldn't find it so I just did Italian Seasoning (I have since found my Oregano).

12.  The sauce started to get really thick and seemed more like gravy.  Definitely too much flour.  I just added more water.

13.  Oh, don't forget to drain the noodles.  I did.  Yes, they were a little soggy.  Insert this step a little earlier when you make it.

14.  Kids were going crazy, husband was home, I was now exhausted from cooking and didn't have energy to prepare a simple salad, but we needed a vegetable.  Then another vision came to me.  Peas.  Peas mixed with the noodles and sauce.  Perfect and even easier than preparing a salad.

15. And then I saw the garlic sitting there unused.  Oh yeah.  I sprinkled in some garlic powder.

So there you have it.  My masterpiece.  The sauce on its own had more than a hint of lime flavor, but actually was very good mixed with the noodles.  My husband even gave the meal two thumbs up!  (Yes, I waited until he had eaten it to tell him the whole thing was completely from my own brain and not one bit of it from a recipe).

We'll call this meal a success.