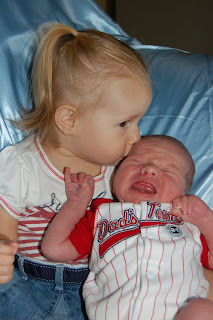 Lucas Edward, aka "Goo" according to Annalee, was born July 23, 2008. His name means bringer of light. He is six weeks old and is a wonderful baby! Life with two kids is better than I expected so far, mostly because he doesn't cry too much and is easy to soothe. Annalee loves her little brother. She's always giving him kisses and is so concerned when he cries (especially when it's her bed time!). She likes to point out his facial features, though I try to limit it to the ears since she tends to poke his eyes out, honk his nose too hard, and gag him with her finger down his throat! I am constantly telling her to be soft (suave), which means that any time she rubs his head (or ours for that matter) she says, "wawee, wawee." Diaper changing time is fun as she pulls out all the diapers in her effort to help.

Luke was born 8 lbs, 1 oz. According to my scale, he now weighs about 12 lbs! He is growing like....like something that grows fast (sorry. Limited sleep makes for limited vocabulary!). Oh, I know. I believe the saying is that he is growing like a weed. He is sleeping well, though he likes to grunt a lot instead of cry. This means that I wake up to all the grunting during the night, only to get up and find he has fallen back asleep! He is keeping his eyes open longer during the day and is getting some good head control. His favorite time to survey the world used to be between 10pm and midnight, but he's much better now.

Overall we are really enjoying the two kids and we're can't wait for the time when they can interact a little more together!
Posted by sherrie bebe at 10:17 PM

Not only are you an amazing woman,wife and mommy, you are a great writer! I look forward to reading your published book!
Love ya!

Your kids are adorable! What a beautiful family :)